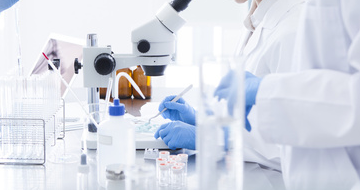 The results are given as a mass percentage for a solid, in molar concentration for a liquid. The determination of value requires several measures. Statistically, a sufficient number of measurements must be taken to get as close as possible to the exact value. The analysis technique also determines the number of measurements to be performed. It is, therefore, important to calculate the mean and precision of the measurements that represent the uncertainty of the measured value. The limit sensitivity of a device is the minimum value that can be measured with this device. Many measuring instruments are automated and in some cases, coupled to one or more computers, allowing a large number of measurements to be made and recorded quickly.

There are two types of analytical techniques: chemical and physicochemical methods, involving chemical or electrochemical reactions, and purely physical methods, which use the physical properties of matter.

These are, in particular, gravimetry and volumetry. The first method is to weigh the amount of a separated compound by selective precipitation. For example, the concentration of the chloride ion in a solution can be determined by causing the precipitation of insoluble silver chloride (AgCl). The precipitate is then recovered and weighed. Gravimetry is a precise but long and delicate method because it requires many prior separation steps.

Volumetry, or titration, consists of measuring volumes of the solution used to assay the sample. The reactions involved are acid-base reactions, oxidation-reduction reactions, or complexations. For example, a solution of ethanoic acid can be titrated with a solution of sodium hydroxide (base) of known concentration ( see Acids and bases ). For complexation reactions ( see Complexes), EDTA (ethylene-diamino-tetraacetic acid) is often used. The titration reactions must be rapid and without side reactions, which tend to distort the results. This condition is more often satisfied with the reactions in mineral chemistry than with the organic functional groups.

They involve electrochemical reactions, such as electrolysis. Electrodes are placed in a solution containing ions. A potential difference is applied between the electrodes, resulting in the passage of electric current: the cautions (positively charged ions) move towards the negative electrode (cathode), and the anions (negative charge ions) are attracted to the positive electrode (anode). The intensity of the current, the potential difference applied to the electrodes, the concentration of the electrolyzed body and the reaction time are connected by a simple mathematical expression, which makes it possible to determine the concentration of the ions in the starting solution. The two main measuring methods are potentiometry, measurement of the potential of the constant current electrodes, and the amperometry, measurement of the intensity of the current at constant potentials. The conductivity is to measure the conductance (reciprocal of resistance) of a solution. It is rather an electrical method, and it allows determining the concentration of ions in a solution.